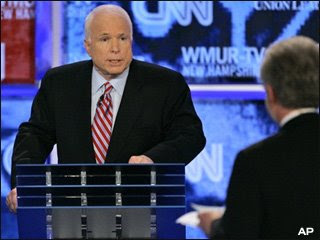 While his shot in the dark VP choice Sarah Palin obviously gave him a lift, Sen. John McCain's most recent gamble just comes off as silly. While I see the logic in trying to seem presidential and serious about the economy, the reality is that most Americans would agree that bringing the two presidential candidates back to D.C. for a few days of "hard work" in the Senate would do nothing but distract from a critical effort to work through an incredibly complex bailout plan. The plan itself is necessary on some level to stabilize markets, but it is critical it be structured in such a way (if possible) that it doesn't bail out people who borrowed more than they could and banks who irresponsibly gave them the money. Whether bundled mortgages can be "unwound" and cleaned off the balance sheets of financial institutions without ending all sense of personal and corporate financial responsibility, I have no idea.

And given McCain's history with bank regulation, I don't really think he's the expert you need on hand to deal with the issue. I have been a lukewarm supporter of McCain through this campaign. But the reality is only a few hail mary passes are going to turn out to be completions, and he already had one. This one has fallen incomplete.

McCain desperately needs a compelling message at this point beyond Sarah Palin. He has to find a way to communicate around a few winning issues, articulate a responsible economic plan, and get back to what made him a special candidate -- his willingness to advocate ideas outside the norm for Republicans, find the middle, and not try to appeal to the "dittoheads" and Hannity fans out there. He got them in the fold with the Palin selection.
Posted by Brian at 8:57 PM

Couldn't agree more! But, I think part of the decision to return to Washington and "address" this issue as a Senator, was in part to the comment last week that "the economy is fundamentally strong," Really? What a gaffe!

McCain - rightly or wrongly - is going to be blamed for the economic woes. And, he needed to at least appear to be concerned enough to work on the solution. That incidently has already been worked out. There was absolutely no way Congress would do nothing before leaving for the Fall "Congressional District Work Period" a.k.a. Recess/Adjournment. But, before they did so, they were going to make a few tweaks (in my opinion, they made some good ones) and get some shots in on the Administration.

In the end, McCain looks silly, pathetic and incompetent. But, hey, he was 40 days to turn it around!