Getting Ready for Augusta National

This is off topic, but awesome. Anyone else ready for Georgia's annual moment in the golf spotlight? The Masters is just a week or two away.....

Check it out, and maybe we can "turn out the lights" in Watkinsville for just a little while this weekend. I will try to remember and do my part. Check out the video below and consider doing yours. Maybe next year we can orchestrate a more organized effort to make this happen in our local cities. 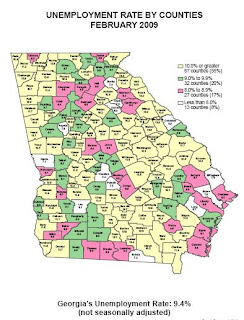 The Georgia Department of Labor has released statistics showing that Oconee County has the state's lowest unemployment rate at 6.0%. The AJC also has an unemployment map and accompanying story out that is worth examining. Overall, Oconee and neighboring Athens-Clarke fare well, as they are among a handful of neighbor counties around the state with average unemployment below 8%. This is a glimmer of good news for our area and region.

As bad as the recession seems locally, the data shows that it is much worse elsewhere, particularly in Northwest Georgia, where carpet manufacturers are shutting down mills. Traditionally rural areas of the state where employment has always lagged are also severely impacted. Case in point are Dalton and Whitfield county, which recently had the dubious honor of having the nation's second highest unemployment rate. As you can imagine, they are not happy about it. Full statistics an 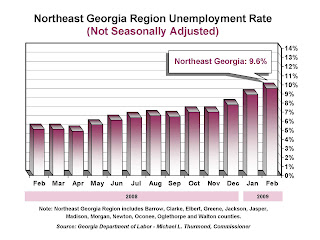 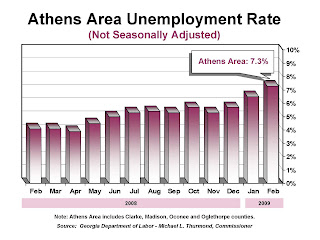 d more charts beyond what I have pulled are here; thanks to the DOL for making them so easy to find and understand.
Posted by Brian at 10:41 PM 1 comment:

As of 7:50 this morning, only 3 people had voted at the Watkinsville East Precinct. The contrast to the jammed polls of November could not have been more stark.

While my son did enjoy the empty building and took the opportunity to show off his nascent football skills to the poll workers, it doesn't say much for voters in Oconee County to have such a small turnout. SPLOST will raise as much as $3 million for sewers, sidewalks, greenspace, playgrounds and public safety investments in the City of Watkinsville (and $37 million for the rest of the county).

Information (and some opinoions) can be found here, here, here, here, and here. The Chamber of Commerce has also weighed in in favor of SPLOST. As I have said before, it is a no-brainer.
Posted by Brian at 8:44 AM No comments:

I missed this neat story about President Lincoln -- check it out when you have time.

Visit msnbc.com for Breaking News, World News, and News about the Economy

Our own State Rep. Bob Smith is proposing that the state have some control Hartsfield-Jackson International Airport, Watkinsville native Scott Trubey reports here for the Atlanta Business Chronicle. Dan Matthews thinks it's a terrible idea, but doesn't say why.

I think it is interesting, at least. While the day-to-day operations of Hartsfield are generally well run, its approach to capital projects is often disastrous.
So the idea that there should be some level of state input on the future of this statewide asset makes sense to me, although state management of any profitable, successful asset gives me pause. I do believe that Ben DeCosta is a good manager (the airport has good retail choices, is clean, efficient, etc.), but it is obvious there is something that constantly gums up the works on big projects at Hartsfield, and I'd love to know what that is.

However, the real transportation asset that should be taken over by the state is MARTA. If there is one asset that needs new management, new capital, and new ideas, that is it. Limiting both our rail and air transportation assets -- which are of critical importance to the state's future economic health -- to the revenues and skill sets available in Atlanta and/or DeKalb counties, doesn't make a whole lot of sense to me.
Posted by Brian at 12:01 AM No comments:

This week, there will be more debate on stem cell legislation in the Georgia House after a weaker -- but still dangerous to the bioscience industry -- bill passed the Georgia Senate late on Thursday.

Jim Galloway of the AJC continues to offer real insights from the Gold Dome, and his story on the issue shows that Georgia Right to Life really cares very little for a key industry in this state. Check out the excerpt below:

The Senate measure has injected uncertainty into the mind of any biotech executive operating in Georgia, Becker said. Keep up the fight year after year, and eventually businesses that rely on embryonic research will realize they’re not welcome.

Becker cited a similar strategy executed in Missouri. Many efforts at embryonic stem cell research in that state have shifted to nearby Kansas and Illinois.

There is no doubt this is a complex issue. After watching the debate around the Senate Bill on Thursday, I realized that the danger isn't necessarily that we are having a dialogue on the issue in Georgia. It is the non-scientific, non-informed nature of that debate that may be truly damaging to our efforts.

Whether you agree with President Bush's decision to ban the use of federal funds for stem cells in 2001 or not, at least he made a serious speech about it and explained his rationale. Watching Georgia's conservative senate delegation attempting to defend their own legislation as something benign -- and at times, as something totally different than it was -- was downright embarrassing, particularly when they claimed the bill would not harm the in vitro industry in Georgia. Fortunately, much of the offending language in that area was removed from the stripped down bill that passed the Senate, and its fate is uncertain in the House.

The stakes are particularly high for our region, which is seeking to position itself as a bioscience hub. One of our own senators introduced the legislation that is now in play -- what does this say for our area? Even if we never have a large stem cell research company in this area, the overall message that this legislation sends to the industry and to researchers is absolutely not a positive, and those who would rather not see bioscience industries in Georgia understand that. And so do other states, which are already using our "drought," transportation woes and other issues against us. They'd love to have one more issue to add to their list.
Posted by Brian at 10:57 PM No comments:

This makes me wish I had HBO

A lot going on, and not a lot of time to blog. Some quick hits: 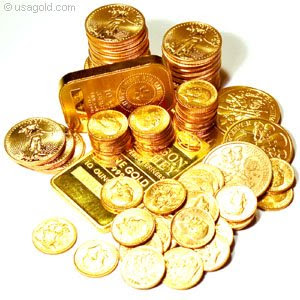 Okay, Georgia Legislators attempting to bring back the gold standard? Unbelievable. Biz Chron subscribers can learn more here. What is wrong with these guys (1, 2)? Do they have nothing better to focus their energy on?
Posted by Brian at 3:10 PM 1 comment:

Is the apocalypse near? Favorite columnist/author Tom Friedman kicks off his column with a quote from The Onion.

But despite the reference, this column from Mr. Friedman will certainly get you thinking. While I'm not sure I buy everything in it as we generate a lot of intellectual capital in the U.S., and still do some true production here (I'm not sure the author totally buys what he's selling in this column either) . However, there is something about our consumer driven culture that disturbs a lot of us at an instinctive level, and he and his sources do a good job of articulating that.
Posted by Brian at 2:54 PM 2 comments:

Musings from the Dome

Some goings on at the Dome that have local relevance:

I have recently been experimenting with Twitter. At first, I thought it was just a huge time suck, but am finding it increasingly useful for work and politics.

Below is a "Twitter Mosaic" that shows my Twitter followers. If you're interested in social media or keeping up with what is going on at a very grassroots, instant level in your community, or about a cause or product you are interested in, Twitter might be for you. I suggest using the Tweetdeck application to keep things organized. For those who want to focus on local commentary, there is a TwitterLocal app, and for those interested in sports, there is Twackle. Unfortunately, none of these apps are integrated.

I can see a lot of uses for Twitter and politics. Twitter searches can certainly help one keep up with issues at a grassroots level, and address controversial issues before they explode. Most politicians on Twitter offer little more than perfunctory updates (so far), which makes me think their staffers are likely handling it for them. However, those who comment on the political process are some of the most active users of Twitter.

Unlike Facebook and Myspace, it seems that locally Twitter has limited penetration beyond students, media types, and technophiles. So the jury is still out on whether it is ultimately useful and lasting, or just this year's version of the beta tape or the Newton.

And of course, there is the ultimate question: do people really care what their 374 followers are up doing or how they feel about an issue, and vice versa? So far, it seems that they do.