The Magic of Small Towns 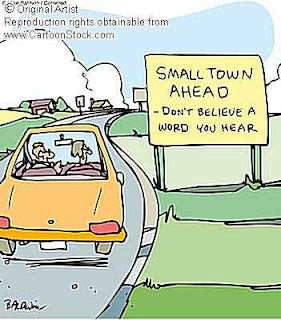 Jason Winders doesn't think there is any magic left in small towns.

That said, I don't necessarily disagree with a lot of the points in his article, just that it is a sweeping generalization. Yes, there is poverty in many smaller communities. There are drug issues. Some are lacking in opportunities.

But I would argue that there is magic left in a lot of smaller communities. A quick drive to the communities that surround Athens would yield some interesting examples. The merchant who knows your name. The downtown that fights to survive -- or even thrives. The bed and breakfast that hosts world class concerts on an old family estate. The entrepreneur who finds a way to make it big in a small town. The pastor who keeps his flock downtown and his church growing. The neighbor who prefers the kindness of others to the "kindness" of the federal government. The retiree who comes back to restore the old homeplace. The families who stay -- despite being able to find more opportunity elsewhere -- because they want their children around family and the values of their church, their community, and their friends. The rural scenery. The quiet.

Indeed, I often feel like much of the anti-growth dialogue in this region is a natural and instinctive reaction by many -- old and new alike -- seeking to protect and preserve the essential "smallness" of their community, their area, or their town. If people didn't feel so passionately about that lifestyle, why would they invest so much energy to fight change that often clearly brings the higher wages, the industry, and the opportunities that are missing in so many smaller communities? They like things the way they are.

The bottom line is that just like there are good cities and bad cities, good neighborhoods and bad neighborhoods, you can't generalize about small towns. They are evolving, as they have for hundreds of years (check out the history of Arcade if you want to see this in action).

Some will fade, some will go away, some will "grow away," and some will retain their identity. Life will get harder in some, and easier in others. But I would argue if there is "magic" anywhere in America, it is often found in its small towns. After all, if Boo Weekley had grown up in a city or suburbia, would he have galloped down the first fairway at the Ryder Cup? Doubtful.

And yes, they will always remain a part of the American political narrative. Too many Americans have roots there, or imagine they do. Few people yearn for a "faster pace." Most don't seek out more traffic. And while there are some who will, most of us don't necessarily want to accept that petty crime is going to be part of our life, as it is for many who live in larger cities. There is a reality behind the symbolism of the small town in our political dialogue. 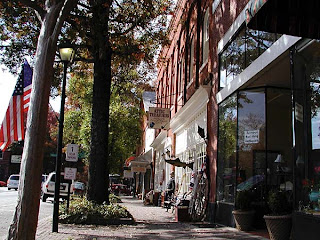 All that said, the scary part about our culture is that due to a number of factors, life in a small town doesn't necessarily imbue the neighborly characteristics we expect. The values and ethics that were once more rigorously instilled and enforced by neighbors in a smaller community are often superseded by the rot that can be accessed online or on television, or even in the human soul. Whether you're in a big city or small town, certain values -- honesty, courage, tolerance, respect, kindness -- should be American hallmarks. Regardless of geography, all too often they aren't, and that's too bad.

P.S. Kudos to Mr. Winders for starting a thoughtful conversation.
Posted by Brian at 10:32 PM