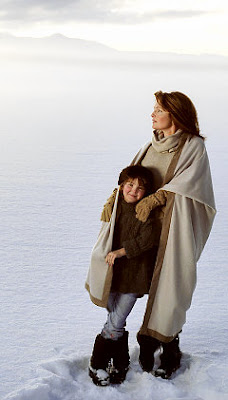 It's been a week and a half since John McCain selected Sarah Palin as his running mate. As I expected, she has withstood the scrutiny and has had a truly transformative effect on the presidential contest, turning what looked like a landslide for Obama into a close race.

The two best write ups I have seen on how this has worked out come from David Brooks in his "Surprise Me Most" column and Camille Paglia at Salon.com (how often do these two get joined at the hip?). Be sure you read these if you are into some navel gazing about this year's election and the state of the nation. Brooks' basic point: that with the Palin choice, McCain took over the role of "most surprising campaign" from Obama and earned the momentum and embrace of independents hungry for change. A key excerpt:

"If I were advising the candidates, I’d tell them to double down on weirdness. Obama needs to occasionally criticize his own side. If he can’t take on his own party hacks, he’ll never reclaim the mantle of systemic change. Specifically, he needs to attack the snobs who are savaging Sarah Palin’s faith and family. Many liberals claim to love working-class families, but the moment they glimpse a hunter with an uneven college record, they hop on chairs and call for disinfectant. Obama needs to attack Bill Maher for calling her a stewardess and the rest of the coastal condescenders.

If I were McCain, I’d make the divided government argument explicit. The Republicans are intellectually unfit to govern right now, but balancing with Democrats, they might be able to do some good. I’d have McCain tell the country that he looks forward to working with Congressional Democrats, that he is confident they can achieve great things together."

Whether you agree or not with her levels of experience or qualifications, no one can argue that the gamble hasn't already paid off politically for Sen. McCain. In a Kasparov like move, he instantly changed the narrative of the campaign, energized the party base, intrigued (at least) women across the country, earned space on main stream talk shows, increased photoshop sales, and forced Sen. Obama to take deep breath, shift resources to battleground states, and go on the offensive by becoming more negative. Even Oprah has taken a hit.

What is fascinating is that McCain is actually being eclipsed by his running mate. Apparently, more people are showing up to see her than him, and more Palin signs are in evidence than McCain signs at joint rallies. If I were a Republican strategist, this would worry me. Republicans also need to be careful about overplaying the "media bias" card -- while some was in evidence, this can't be used as an excuse for not allowing her to be interviewed by some of the most respected members of the national political press.

I will also say this -- her official politics are well to the right of mine, although she has shown a willingness to compromise that is impressive. With a Democratic Congress, a Palin-McCain administration could engage in just the right amount of change that will help move our country forward without forgetting where we come from and our tradition of self-reliance. I have always said that most healthy policy is passed when the legislative and executive branches are in different hands, and I hope that will be the case next year.

Since I first posted my first review of the Palin choice, a lot of my democratic friends have asked me why. Most were stunned by the choice, and I think the vehemence of the liberal/democratic reaction showcases their underlying fears and their need to tear her down. A STRONG, ARTICULATE WOMAN? REPUBLICANS? A WOMAN WITH AN INFANT? SOMEONE UNDER 55 WITHOUT GRAY HAIR? They weren't counting on this.

Big media types, government employees and those committed to Sen. Obama also simply don't understand the appeal of someone so close to normal to the vast majority of independent and undecided voters in this country. They also don't appreciate the number of decisions that the mayor of a small- or medium-sized town has to make, never mind a governor, when they belittle her experience.

Since it's college football season, I'll put it like this: The score is 21-17 with 1:00 left in the 4th quarter and one team (let's just call them the Donkeys for fun) are ahead of their hated arch rivals, the Elephants. The elephants have had two defensive touchdowns and a field goal and haven't looked good all day. It's a miracle they're still in the game. Their fans just want to return to their tailgate. The 'phants have the ball, but it's on their own 20. Hopeless, right? Well, with the Palin choice the Elephant quarterback just threw a 75 yard bomb that gets them to the Donkeys' five with :50 left in the game. The Donkeys know the Elephants will probably get the touchdown and maybe the win. The Donkeys will need to get the momentum back with one of their own miracles, or play ridiculous defense.

So does the Obama team have a good return man? A hail mary left in the arm? My advice to them -- avoid Palin. Focus on McCain. Don't go after the strength of your opposition. Go after the weakness. You aren't going to beat Sarah Palin. Ironically for Republicans, the weaker politician is our presidential nominee. Fortunately for Americans, if McCain is elected, we will have a good president in office.

As one of your liberal/democratic friends who was indeed stunned by the selection of Palin, I think you are doing us a disservice, and frankly I'm surprised that as a self-proclaimed "voice of moderation" you can't see any of the merits of our reaction. For starters, don't tell me that many Republicans weren't "stunned" too.

As conservative commentators agree (when they don't know the microphones are on), this was a cynical ploy by the McCain campaign favoring form over substance. Even Karl Rove said Palin wasn't qualified to be VP. No wait, he said that about Governor Tim Kaine of Virginia, who had previously been lieutenant Governor and mayor of Richmond.

You can crow all you want about the fact that the image is working, but don't pretend you wouldn't be just as alarmed and even apoplectic if roles were reversed. Don't kid yourself. We know almost nothing about Palin, and if the GOP has it's way we will know precious little more before the election. I can't for the life of me figure how you say she has survived "scrutiny" when she has been through nothing but orchestrated events and the campaign cries "foul" and "media bias" at any attempt to question the image they have constructed for her.

If you haven't figured out why the Bush administration was such a failure it's because they placed a higher value on politics than they on competent governing. For all your fawning over Palin (she's pretty! she runs! she'll help McCain get elected!) I still find it hard to believe you really think she's a great choice for helping McCain govern or (God help us) taking the reins of the most powerful nation in the free world. I guess that might be a little late to ask if she's looking forward to the rapture.

I swear you would be excited about Bernie Brewer for VP if he helped McCain win the white house. Word to the wise - the guy had a serious drinking problem till they took away the giant mug.

I do see some merits to the reaction and pieces of the argument, and have told you so. I have conceded that she is short on foreign policy experience. In case you missed it, I said in the post that the media bias arguments are overblown and that she should submit to non-orchestrated interviews, etc. These will be telling.

That said, I think that yes, she would be refreshing in terms of government leadership. What's so wrong with having a non-wonk in Washington or non-insider in a position of power in D.C.? Not owing something to every lobbyist on the hill can have a very "freeing" effect.

I just don't buy the argument that five years as a member of a deliberative body (at either the state or national level) is that much more valuable than several years in an excutive position. Sorry.

And you know my fundamental principal -- that a split between the executive and legislative branch almost always leads to better legislation, especially when you have a first term president.

I do love the idea floated today by Thomas Friedman -- that Obama should consider calling himself a one term president and positioning himself as the true change agent.

I'd be careful to expect much from either an Obama or McCain administration. Budget constraints, evenly-split Congress, learning the vast bureaucracy are what we know they will have to navigate. But, what usually occurs unseen -- and what has a major impact on whether their presidency will be effective, in my opinion -- is who advises the President and sits at the Cabinet table.

More often than not, they need to be Washington-insiders because they know the players, have relationships with the power brokers and understand how to get things done. That's one of the lessons Clinton learned after his first term and Bush 43 has yet to learn!

For my vote, that will be the most telling factor -- who do they favor for various posts. And, Brian, while you may not want a DC-insider as VP, they are vital to making sure the administration starts smoothly and can accomplish anything in the short amount of time new Presidents have to govern before the mid-term elections change the tone back to politics and not policy.

Eric, I agree that Palin was a pure political move. So what? I cannot remember a time when one party's post-convention "bounce" received next to zero coverage for VP pick! Campaigns are meant to be won, not just run through the motions!

Still, McCain-Palin can be the "true mavericks" and Obama-Biden can be "change we can believe in", but having those knowledgeable in the reins of government behind the candidates will determine whether we have an administration that is effective or struggles.

And, let's not forget, that outside events can change any administration's plans very quickly and refocus the nation's priorities. I think I know who both of you would like as President when this happens -- as for me, I'm not sure.